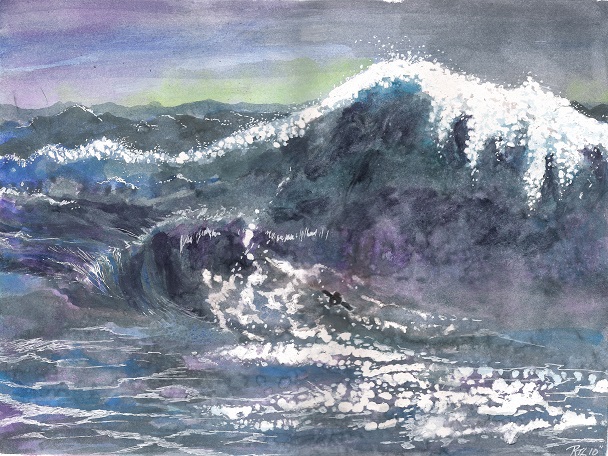 “Kara and the Wave”, watercolor and graphite, May 2016.
One of the watercolor paintings illustrating my book The Tembelaka Voyage! Here’s an excerpt of the chapter it’s from:

Ships weren’t supposed to do this, Kara realized, as one shouting sailor went tumbling down into froth and foam. The ship was pulled sideways, up onto a big wave. A great shadow loomed in the other direction, and Kara stared openmouthed at the even huger wave coming at her. It was like a cliff, and a whole mountain range beyond that raced along the worried surface of the ocean. Kara chose one last breath over swearing. There were shouts, screams, thunderous noise, and then it was all lost in the awful silence of the water.
Kara couldn’t hold on to anything, even up. The water tossed, pulled, and threw her. She broke the surface by accident, for too short a time. She kicked at the water, fought it until she found air again, and the process repeated as she grew more and more tired of fighting.